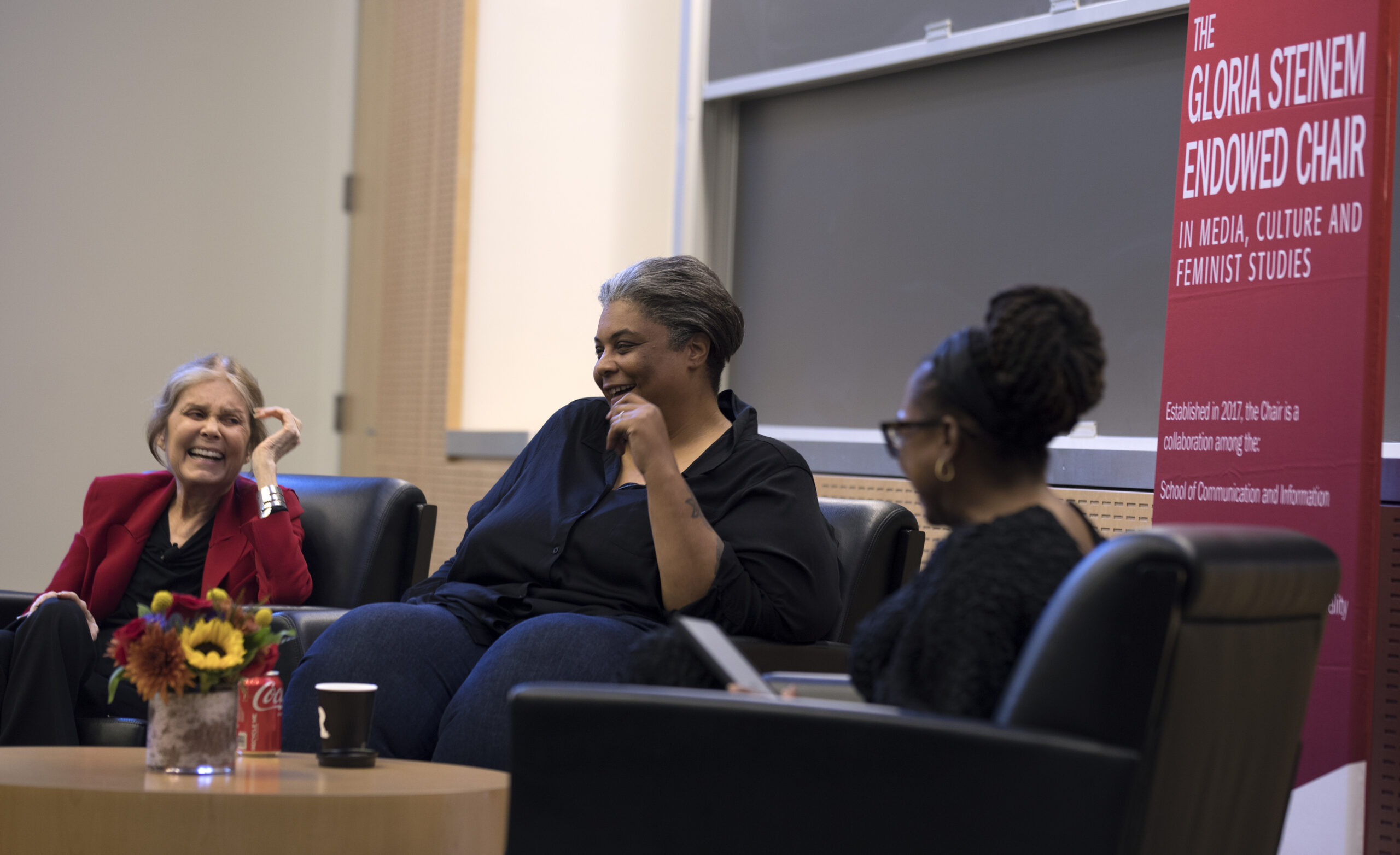 New York Times bestselling author and cultural critic Roxane Gay tackled many pressing issues in the news centered around civil rights, reproductive rights, and social justice during a wide-ranging conversation with feminist icon Gloria Steinem in her first event as a member of the Rutgers faculty.

The discussion between two of the country’s most prominent modern feminist figures served as the launch of Gay’s three-year service as the university’s Gloria Steinem Endowed Chair in Media, Culture and Feminist Studies. The Nebraska native will teach, organize public events for the Rutgers community and lead workshops to explore writing on cultural criticism, trauma, creating change and writing across differences.

Their talk covered the media’s complicated role, modern feminism, cultural shifts and radical change following major U.S. Supreme Court decisions including the recent ruling to overturn Roe v. Wade. Gay and Steinem spoke of the intersections and importance of writing, journalism and media and their impact on democracy.

Feminist activist and writer Jamia Wilson moderated the dialogue, which drew an exuberant audience of more than 250 students, faculty and staff. Read the full story. 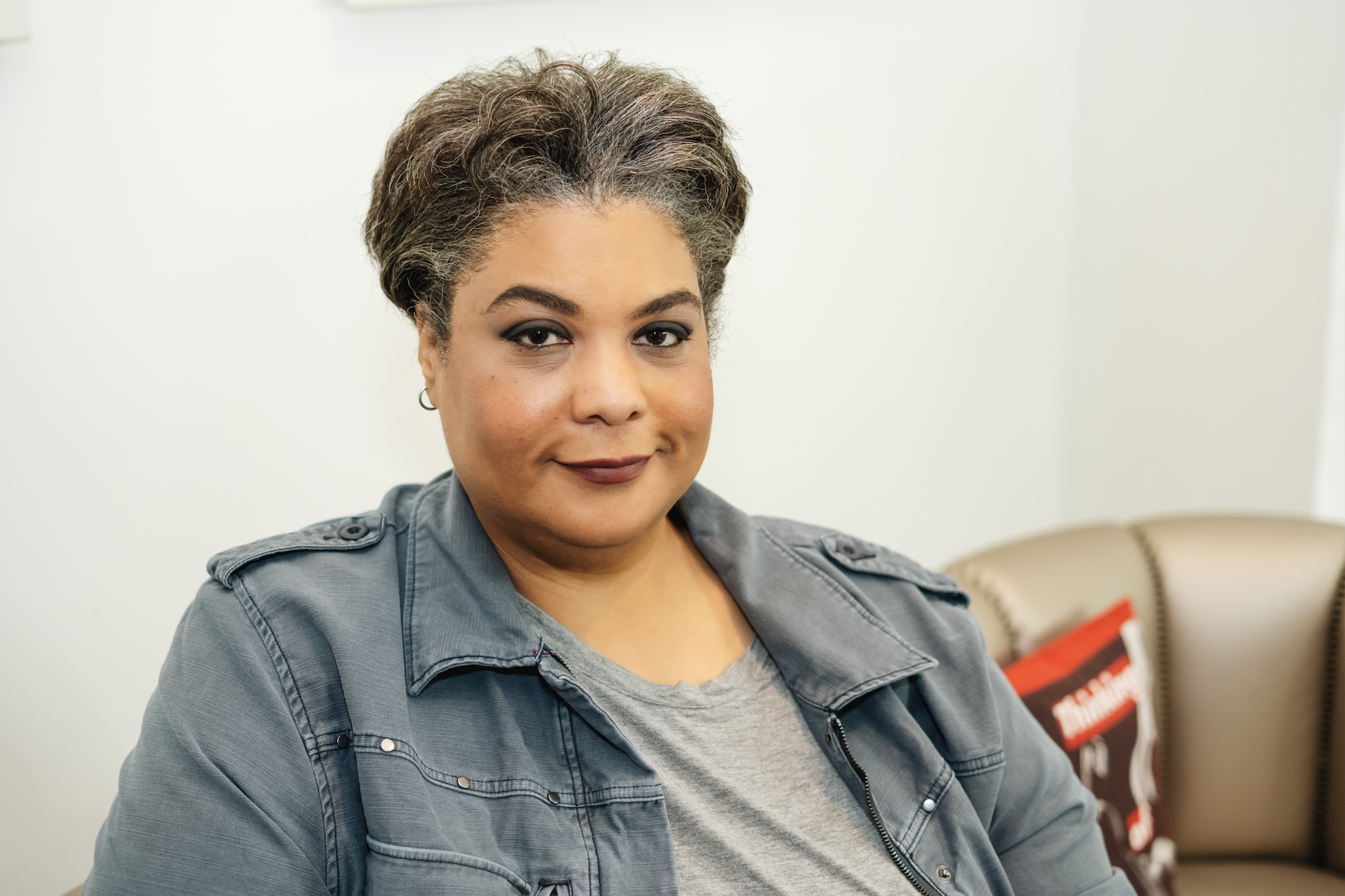 Roxane Gay, an internationally recognized writer, editor, cultural critic, and educator, has been selected as the next Gloria Steinem Endowed Chair in Media, Culture and Feminist Studies at Rutgers University-New Brunswick.

“I am truly honored to serve as the new Gloria Steinem Endowed Chair at Rutgers," Gay said. "I walk and work in the footsteps of the many feminists and womanists who came before me, and Gloria is one of the giants among those women. I look forward to joining and contributing to a vibrant intellectual community both on and beyond campus."

Gay’s pursuit of social justice makes her appointment especially powerful as she brings a commitment to centering underrepresented voices along with deep and broad experience in media.

The chair is a collaboration among the Rutgers School of Communication and Information (SC&I), the Institute for Women’s Leadership (IWL), and the Department of Women’s, Gender, and Sexuality Studies at the School of Arts and Sciences (SAS).

Jonathan Potter, the outgoing SC&I dean, said Gay "is incisive, analytic, disruptive, and comfortable challenging authorities of all kinds. What a perfect match for Rutgers. I look forward to seeing her stir up the thinking of the next generation of students."

As chair, Gay will lead workshops to explore writing on cultural criticism, trauma, creating change, and writing across difference.

"Being in a classroom with Roxane Gay is an extraordinary opportunity for students to grow as writers and amplify their voices as a force for social transformation," said Rebecca Mark, IWL director.

Dafna Lemish, the incoming interim dean and Distinguished Professor of Journalism and Media Studies at SC&I, chaired the selection committee and noted Gay was chosen from an outstanding pool of candidates.

“We are so excited to welcome Roxane," Lemish said. "Her appointment is timely, as she serves as a wonderful role model of resilience, dedication to social justice, and the value of being community-engaged. I have no doubt that Roxane will be inspirational and transformative for our campus. I can hardly wait for her to join us.”

Funded by more than 425 donors, including a dozen foundations, the Steinem chair endowment was established to serve as a tribute to the groundbreaking leadership of Gloria Steinem. It was created to honor, retain, and recruit eminent scholars and practitioners who will help immerse the university community in debate and scholarship about new media, social change, and power structures. The chair launched in September 2018 with Naomi Klein serving as the inaugural occupant. 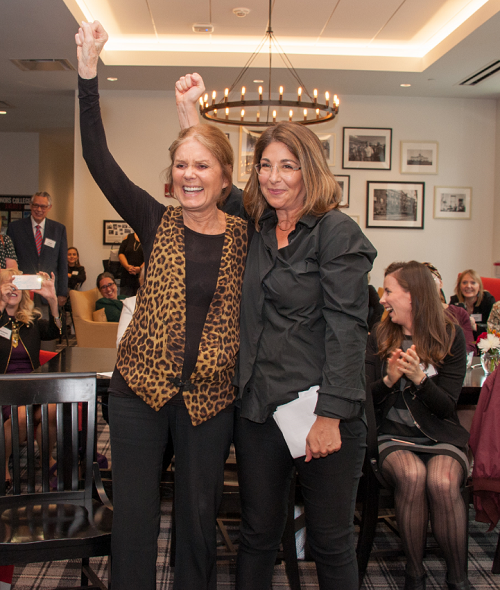 It was a critical time in the American social, political, and media landscape when Naomi Klein began her tenure as the inaugural Gloria Steinem Endowed Chair in Media, Culture and Feminist Studies at Rutgers University.

A public intellectual, global activist, and acclaimed journalist, Klein was an extraordinary choice to bring to life the first-ever academic chair designed to celebrate the vision and legacy of Gloria Steinem.

Klein taught five undergraduate seminars through the School of Communication and Information and the Department of Women's, Gender, and Sexuality Studies. In her classrooms, students examined the ideas and implications of humans as brands and studied the ways contemporary social movements are shaped by the twin forces of digital technology and marketing logics. Klein inspired the Rutgers community to take action and work together for a better world.

We are grateful for the lasting impact Naomi Klein has made as the Gloria Steinem Chair and send our best wishes for continued success in her position as the inaugural Faculty of Arts Chair in Climate Justice at the University of British Columbia.

Rutgers University has established the first ever Gloria Steinem Endowed Chair in Media, Culture and Feminist Studies. Through this groundbreaking chair, Rutgers will educate future generations of students from underrepresented groups, to harness the power of media and transform society.

The chair – a collaboration among Rutgers Institute for Women’s Leadership, School of Communication and Information and the Department of Women’s, Gender, and Sexuality Studies at the School of Arts and Sciences – focuses on the complex ways information technology and new media are reshaping culture now, and could increase accuracy and representative stories in the future.

The Gloria Steinem Endowed Chair in Media, Culture, and Feminist Studies, funded by more than 425 donors, including a dozen foundations and a matching pledge made possible by Rutgers President Robert Barchi, will immerse students in debate and scholarship about new media, social change and power structures.

“We know that new media are transforming our governance,” Gloria Steinem said, “and also that they may be short on facts and context. We also know that heritage media haven’t always told an inclusive story. I’m very proud that the late Alison Bernstein, a visionary scholar who directed Institute for Women’s Leadership, committed this chair to inclusiveness and accuracy. I’m also proud that Rutgers is not only one of the oldest and most respected public universities, but has a student population that looks like the nation. I’ve come to believe it’s as good as Harvard – with democracy added. It also happens to be next to one of the media capitals of the world.”

The idea for the chair originated in 2014 with Bernstein, a visionary scholar who became director of Institute for Women’s Leadership in 2011. Bernstein saw the chair as a way to simultaneously honor an American feminist icon and establish a multidisciplinary teaching role leveraging Rutgers’ strong platforms in media, social change, and women’s and gender studies.

Despite Bernstein’s untimely death from cancer in 2016, her quest to create the first academic position named for a preeminent living feminist grew into a shared mission. A steering committee of dedicated volunteers continued to raise funds.

Committee co-chairs Geraldine Laybourne and Subha Barry expressed gratitude to all who contributed to the fundraising effort and to Steinem, who embraced the initiative and assisted at every phase. “Everything that Gloria does is inclusive and every question she makes us think about is important,” they said in a joint statement. “The fundraising for the chair was a tremendously fun learning experience. Imagine what this will mean for students – and for media.”

For more information about the Gloria Steinem Endowed Chair in Media, Culture, and Feminist Studies, please reach out to Nishi Shah, Program Coordinator at nishi.m.shah@rutgers.edu. For event or speaking requests for the Chair, please email gschair@rutgers.edu.