Rutgers, The State University of New Jersey, has a unique history as a colonial college, a land-grant institution, and a state university. Chartered in 1766 as Queen's College, the eighth institution of higher learning to be founded in the colonies, the school opened its doors in New Brunswick in 1771. In 1825, the name of the college was changed to honor a former trustee and Revolutionary War veteran, Colonel Henry Rutgers.

Rutgers College became the land-grant college of New Jersey in 1864, resulting in the establishment of the Rutgers Scientific School, featuring departments of agriculture, engineering, and chemistry. Further expansion in the sciences came with the founding of the New Jersey Agricultural Experiment Station in 1880, the College of Pharmacy (now the Ernest Mario School of Pharmacy) in 1892, the College of Engineering (now the School of Engineering) in 1914, and the College of Agriculture (Cook College) in 1921. Rutgers College assumed university status in 1924, and expanded significantly with the founding of an evening division—University College—in 1934, and the addition of the University of Newark (now Rutgers–Newark) in 1946, and the College of South Jersey at Camden (now Rutgers–Camden) in 1950. Legislative acts in 1945 and 1956 designated Rutgers, “The State University of New Jersey.”

The Beginnings of Douglass

During the first decade of the twentieth century, only one college in New Jersey admitted women. The College of St. Elizabeth, which had been founded by the Sisters of Mercy in 1899, graduated its first class of four women in 1903. To increase women’s access to higher education, the New Jersey Federation of Women’s Clubs launched a campaign to create a public liberal arts college for women that would be non-denominational and affordable.

Under the leadership of Mabel Smith Douglass, a Committee of the Federation of Women’s Clubs devised a multi-pronged strategy to create a space in which women would have comparable educational opportunities to men. Pointing out that federal land-grant funding for Rutgers was being used exclusively to benefit men, who comprised less than one-third of the high school students in the state, Douglass mobilized school superintendents and principals to support higher education for women. Lobbying wives of members of the Rutgers Board of Trustees, Douglass creatively deployed their influence to help persuade the President and the Board to allocate land and a building for the new college.

Tapping the political commitments and economic resources of women across the state, Douglass initiated a “one-dollar women’s subscription” to raise $150,000 to support the college. Building a coalition of supporters strong enough to overcome significant opposition, Douglass succeeded in founding The New Jersey College for Women at Rutgers in 1918 to offer women “a cultural broadening in connection with specific training so that women may go out into the world fitted not only for positions on the lower rung of the ladder of opportunity but for leadership as well in the economical, political, and intellectual life of this nation.”

Throughout the third and fourth decades of the twentieth century, the college offered public higher education to women, growing in size and reputation. The first class of 42 women graduated in 1922. In 1955, the college was renamed Douglass College in honor of its founder and first dean. Since 2007, Douglass is the only residential women’s college in the nation that is housed within a world class public research university. 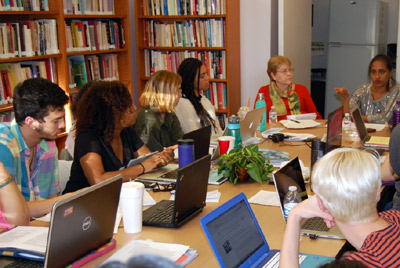 Building on the early initiatives at Douglass College, Rutgers, in the late 1960’s was among the first schools in the nation to offer courses in Women’s Studies and to encourage path breaking new research on women and gender. By 1970, Rutgers established a Women’s Studies Program. Rutgers was also one of the leaders in offering educational programs on women in public leadership, and in 1971, the Center for American Women and Politics was founded at the Eagleton Institute of Politics on the Douglass College Campus. Throughout the 1970’s and 1980’s women’s education at Rutgers expanded and, across the nation, women’s studies became a major social, political, and intellectual movement in the United States. The Institute for Research on Women was founded at Rutgers in 1971 and in 1989, the Center for Women’s Global Leadership was founded at Douglass College.

Today Rutgers is home to the largest and most distinguished collection of academic units devoted to women and formally connected since the early 1990’s as the Institute for Women’s Leadership Consortium. 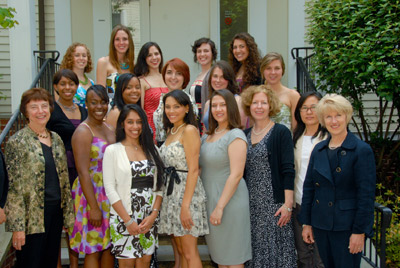 In the late 1980’s Mary S. Hartman, then Dean of Douglass, began to meet informally with the directors of the women’s programs and centers located on the Douglass campus. These gatherings became a forum for working collaboratively to develop and strengthen women’s education at Rutgers and to consider the critical underrepresentation of women in leadership in all arenas at the local, national and international levels.

In 1991, under Mary Hartman’s leadership, the directors formed a consortium to address this underrepresentation. Declaring the mission of the Institute as “dedicated to examining issues of leadership and advancing women’s leadership in education, research, politics, the workplace, and the world,” the founding directors established the Institute as a collaborative enterprise, the nation’s first such consortium dedicated to women’s lives and leadership.

The founding directors of the new Institute for Women’s Leadership were:

Shortly after its founding, the Institute added the Center for Women and Work, directed by Dorothy Sue Cobble at the Rutgers School of Management and Labor Relations (1993). In 2007, under Judith Brodsky and Ferris Olin’s leadership, the Institute for Women and Art (now the Center for Women in the Arts and Humanities) joined the consortium. In 2008, the Office for the Promotion of Women in Science, Engineering and Mathematics, under the direction of Vice President Joan Bennett, became the eighth member unit of the Institute for Women’s Leadership. In 2011, the Center on Violence Against Women and Children (now Center for Research on Ending Violence) became the ninth member of the consortium under the direction of Judy Postmus. In October 2020, IWL welcomed the Center for Women in Business, Rutgers Business School, directed by Lisa Kaplowitz, as our tenth consortium member.